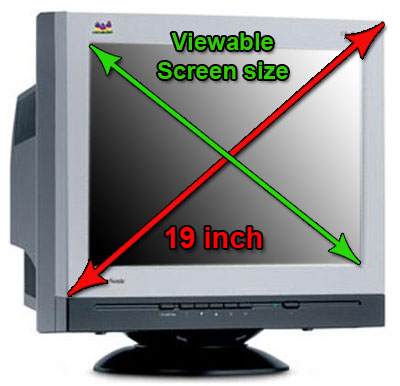 Two measures describe the size of your display: the aspect ratioand the screen size. Historically, computer displays, like most televisions, have had an aspect ratio of 4:3. This means that the ratio of the width of the display screen to the height is 4 to 3.

For widescreen LCD monitors, the aspect ratio is 16:9 (or sometimes 16:10 or 15:9). Widescreen LCD displays are useful for viewing DVDmovies in widescreen format, playing games and displaying multiple windows side by side. High definition television (HDTV) also uses a widescreen aspect ratio.

All types of displays include a projection surface, commonly referred to as the screen. Screen sizes are normally measured in inches from one corner to the corner diagonally across from it. This diagonal measuring system actually came about because the early television manufacturers wanted to make the screen size of their TVs sound more impressive.

For LCD monitors, screen size is measured diagonally from the inside of the beveled edge. The measurement does not include the casing as indicated in the image below.

Because of the differences in how CRT and LCD monitors are measured, a 17-inch LCD display is comparable to a 19-inch CRT display. For a more accurate representation of a CRT's size, find out its viewable screen size. This is the measurement of a CRT display without its outside casing.

Popular screen sizes are 15, 17, 19 and 21 inches. Notebook screen sizes are smaller, typically ranging from 12 to 17 inches. As technologies improve in both desktop and notebook displays, even larger screen sizes are becoming available. For professional applications, such as medical imaging or public information displays, some LCD monitors are 40 inches or larger!

Obviously, the size of the display directly affects resolution. The same pixel resolution is sharper on a smaller monitor and fuzzier on a larger monitor because the same number of pixels is spread out over a larger number of inches. An image on a 21-inch monitor with an 800x600 resolution will not appear nearly as sharp as it would on a 15-inch display at 800x600. ­

If you have been around computers for more than a decade, then you probably remember when NEC announced the MultiSync monitor. Up to that point, most monitors only understood one frequency, which meant that the monitor operated at a single fixed resolution and refresh rate. You had to match your monitor with a graphics adapter that provided that exact signal or it wouldn't work.

The introduction of NEC MultiSync technology started a trend towards multi-scanning monitors. This technology allows a monitor to understand any frequency sent to it within a certain bandwidth. The benefit of a multi-scanning monitor is that you can change resolutions and refresh rates without having to purchase and install a new graphics adapter or monitor each time.