Computer users have a wide variety of computer display preferences, but a contentious argument has been used in favor of the curved display. In this context, this study investigated the users’ curvature preference for six different content types, and compared the usability of the curved and flat panels in terms of readability performance. A 27-inch bendable display panel was devised for the experiment to enable users to adjust the curvature manually. In the first experiment, the study participants searched for the optimal radii of curvature when the six content types were mounted in sequence on the bendable display, which confirmed the users’ preference for the curved display over the flat display. The following experiment demonstrated that the study participants showed improved readability on the curved display, which supported the study hypothesis. The results of the experiments in this study suggest that the curved display will help improve the work efficiency of consumers.

Since curved televisions were introduced in the market, the consumers have paid attention to this new viewing experience, which has resulted in a noticeable increase in sales [1After Years of Flattening, Curved TV Screens Leap into the Global Market, According to NPD DisplaySearch. <http://www.displaysearch.com/cps/rde/xchg/displaysearch/hs.xsl/140404_curved_tv_screens_leap_into_the_global_market.asp>. [Google Scholar],2Curved Screens Make Our Brains Light Up with Pleasure. <https://www.newscientist.com/article/mg22229714-900-curved-screens-make-our-brains-light-up-with-pleasure/>. [Google Scholar]]. Experts forecasted further market growth and predicted the expansion to other display products. More recently, leading display manufacturers launched curved monitors, and a sharp increase in sales has also been observed [3Samsung Electronics' Curved Monitor Portfolio Surpasses One Million Sales Mark. <http://news.samsung.com/global/samsung-electronics-curved-monitor-portfolio-surpasses-one-million-sales-mark>. [Google Scholar],4Samsung is the Leader in the 4 K Market … . For the Time Being. <http://4k.com/news/samsung-is-the-leader-in-the-4k-market-6784/>. [Google Scholar]].

Despite the market growth, however, there have been few studies that provide empirical evidence of the advantage that the consumers can derive by using a curved display [5K.A. Jeong, N. Na and H.J. Suk, SID. 15, 130–133 (2015). doi: 10.1002/sdtp.10314[Crossref], [Google Scholar]]. In general, it has been said that people prefer curvilinear to rectilinear objects [6O. Vartanian, G. Navarrete, A. Chatterjee, L.B. Fich, H.Leder, C. Modroño, M. Nadal, N. Rostrup and M. Skov, Proc. Nat. Acad. Sci. 110, 10446–10453 (2013). doi: 10.1073/pnas.1301227110[Crossref], [PubMed], [Web of Science ®], [Google Scholar]]. From a simple geometric form to a complex form, curvilinear objects are likely to be preferred to rectilinear objects. Based on such conception, it has been anticipated that the curved display will be preferred to the flat display [7K. Choi, H. Bae, S.-W. Ju and H.J. Suk, presented at the SID Symposium Digest, 2015. [Google Scholar]]. Indeed, the manufacturers advertise the excellence of the curved displays based on the principle of human vision; for instance, it is often quoted that the human vision system has evolved to perceive three-dimensional surroundings rather than a flat surface [8V.S. Ramachandran, Nature. 331, 163–166 (1988). doi: 10.1038/331163a0[Crossref], [PubMed], [Web of Science ®], [Google Scholar],9P.H. Winston and B. Horn, The Psychology of Computer Vision (McGraw-Hill, , , 1975). [Google Scholar]]. According to this assertion, the viewing distance can be better maintained when one watches a curved display, which may contribute to more comfortable and immersive viewing. In addition, Kelley's study demonstrated that the curved display can more effectively avoid the reflection of the ambient light source by testing the reflection performance of two of the most recently released models of the curved television [10E.F. Kelley, Inf. Disp. 30, 12–19 (2014). [Google Scholar]].

With the rising interest in the curved display, there have been a number of researches on the optimal curvature of such display, especially in relation to the curved TV [11Y. Park, J.J. Yoo, D. Kang and S. Kim, J. Soc. Inf. Disp. 23 (9), 391 (2015). doi: 10.1002/jsid.348[Crossref], [Web of Science ®], [Google Scholar],12S. Park, J. Yi, D. Choi, S. Lee, G. Kyung, B. Choi, J. E. Lee and S. Lee, presented at the SID Symposium Digest of Technical Papers, 2016. [Google Scholar]]. For instance, Park et al. proposed a model that can calculate the proper curvature, which maximizes the preference and minimizes the distortion. Still, the aforementioned researches have a limitation in that the experiments were performed with fixed radii rather than letting the users find their own optimal curvature.

In this regard, in this paper, the reading performances of the users on a monitor-sized curved display and a flat display were examined, and the two display types were compared in terms of usability. Reading performance or readability includes the following in its dictionary definition: (a) legibility; (b) reading ease; and (c) interest value of a text. As people deal with a huge amount of texts with computers [20D.C. Anastasiu, A.M. Rashid, A. Tagarelli and G. Karypis, presented at the 2015 IEEE 31st International Conference on Data Engineering, 2015. [Google Scholar]], the reading ease or legibility of the text is important. The present study has two key contributions. First, the study participants’ subjective preference for a curved monitor was investigated, and its optimal radii were analyzed. Second, it empirically investigated the advantages of the curved display by evaluating its usability.

This study involved two experiments. In Experiment 1, the influence of each content type on the optimal radii of curvature was assessed by mounting six content types on a bendable display panel. Next, Experiment 2 was conducted to compare the readability of the flat and curved panels, and the usability of the curved display was determined based on the experiment results. The preparation of the experiment stimuli is explained in the following section.

A bendable display panel was devised so that the users could flexibly vary its curvature. As illustrated in Figure 1, the radius can be easily modified by pulling or pushing the bar handle. When the handle is pulled, the radius decreases up to 200 mm, and when it is pushed, the radius increases. When this tension between push and pull reaches an equilibrium state, the panel becomes flat. If the bar handle is pushed farther, the panel takes on a convex shape that may reach 1000 mm. The size of the display panel is 27 inches diagonally, with a 16:9 aspect ratio, and the display panel is labeled ‘27-inch panel’ throughout this paper. 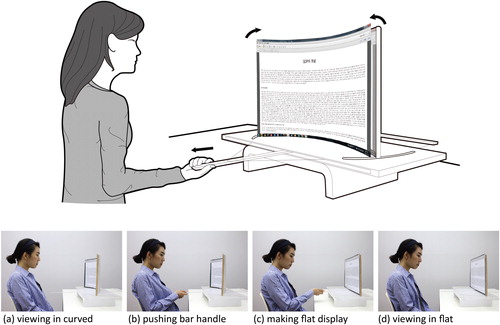 To simulate the monitor contents displayed on the 27-inch panel, six types of contents were prepared. It is generally known that computer users spend most of their computer time surfing the Web, creating documents or presentations, reading books, watching movies, or playing games [20D.C. Anastasiu, A.M. Rashid, A. Tagarelli and G. Karypis, presented at the 2015 IEEE 31st International Conference on Data Engineering, 2015. [Google Scholar]]. Therefore, as presented in Figure 2, the contents used in this study consisted of (a) a photograph (human faces); (b) a worksheet (Microsoft Excel); (c) a computer graphic image (Microsoft Windows default background); (d) a geometric image; (e) a 3D game scene; and (f) plain text. With regard to the plain text, five variations were made, each containing 2500 Korean letters. The texts were presented with a San Serif typeface and a 12-point font size, which was cited in a previous study as adequate for comfortable reading [21M.L. Bernard, B.S. Chaparro, M.M. Mills and C.G. Halcomb, Int. J. Hum. Comput. Stud. 59 (6), 823–835 (2003). doi: 10.1016/S1071-5819(03)00121-6[Crossref], [Web of Science ®], [Google Scholar]]. The content sheet could be easily attached or detached by the experimenter.

Experiment 1 was performed to determine the optimal radius of the 27-inch panel, and to investigate how it changes while the user views various types of visual contents.

A total of 30 college students (15 males and 15 females) participated in Experiment 1. The average age of the participants was 21.93 years, with a standard deviation of 2.91 years. All the participants were paid volunteers.

The participants were seated at a 60 cm distance from the display panel, and explored the optimal radius of curvature for viewing the five content types ((a–e) in Figure 1). They also had an option to choose the flat shape as the optimal form. In Experiment 1, the plain text ((f) in Figure 1), whose optimal radius of curvature was planned to be investigated in Experiment 2, was excluded. The experiment room was lit with 6500 K, and the illuminance was 600 lx. Under this illumination, the luminance reflected from the white area in each content image was measured as 77.40 cd/m2. The experimenter attached to the panel one of the five visual contents, which had been printed on glossy paper, and the study participants pulled or pushed the bar handle until they found what they believed to be the optimal radius of curvature for each content. The five contents were presented in random order, and the optimal radii found by the participants were recorded.

3.2. Results of Experiment 1, and analyses thereof: optimal radii of curvature

The mean of the optimal radii of curvature of the six content types was calculated to determine if the curved display could appeal to the study participants consuming different content types. The radius with a convex shape was not selected in any of the given contents. Even when the study participants were given an opportunity to choose the flat shape as the optimal panel form, all of them chose the curved shape as such.

As shown in Table 1, the study participants found the worksheet as having the largest radius for viewing (900.00 mm), followed by the computer graphic image (827.67 mm) and the geometric image (776.67 mm). This study also demonstrated that the study participants preferred the smallest mean radii of curvature for the 3D game among the chosen contents, which confirms the results of the study recently conducted by Choi et al., while the content with a structured layout, the worksheet, had the largest mean radii of curvature [17B. Choi, S. Lee, J.E. Lee, S. Hong, J. Lee and S. Kim, J. Inf. Disp. 16 (4), 217–