The VP2770 (LED) is the first 27-inch IPS panel-equipped model from ViewSonic with the WQHD standard (2560×1440), like ASUS with its PB278Q. However, the manufacturer decided to opt for the the new PLS panels from Samsung.It appears that the PLS panel in the VP2770 is manufactured by Samsung and should therefore technically be a PLS panel, but the marketing material says IPS. In real-life use this makes no difference whatsoever, as these acronyms are basically two words for the same thing (more or less). 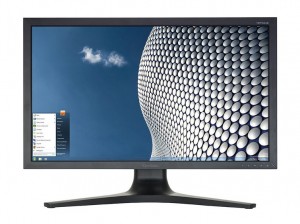 As the name implies, the panel is backlit by LED light sources. If you are used to TN panels, this might come as a surprise, but LED backlighting technology is actually not a standard in professional-grade IPS monitors. Good-old CCFLs are still in use here. This is not necessarily a bad thing, since the screen brightness as measured in nits is often identical. In this case it’s specified to 300 nits, and with a static contrast ratio of 1000:1. The dynamic ratio is as always much higher, at 20,000,000:1, but these specs including the 178-degree viewing angles are all typical for this type of monitor.

One value that gamers are usually interested in is the response time – 12 ms is rather high compared to most TN monitors, but not necessarily an impediment for playing games (16 ms is usually considered an upper limit for gaming).

On the interface side, you can connect to the Viewsonic VP2770-LED using an analog D-Sub/VGA (maximum supported resolution of 1920×1080), digital DVI-D, HDMI 1.4 or Display Port 1.2. Other ports include two USB 2.0 and two USB 3.0. There are no built-in speakers but the monitor does come with a headphone jack.