Home  > INFO CENTER  >  All About Ultrawide Monitors, the Latest Trend in Gaming and Productivity

All About Ultrawide Monitors, the Latest Trend in Gaming and Productivity

You’ve probably seen co-workers or friends with a multi-screen setup before. These monitor layouts can be effective at displaying a lot of information at once, but they’re also difficult to set up, and leave ugly bezels in the spaces between each screen.

To solve this problem, manufacturers have begun releasing “ultrawide” monitors, which eschew the traditional 16:9 aspect ratio for a leaner (and some would say meaner) 21:9. Talk to ultrawide owners and they’ll tell you the monitors can make you more productive during the day and a better gamer by night, but is all the hype actually true? And if so, is an ultrawide monitor a good investment for your setup?

What Are Ultrawide Monitors?

Ultrawide monitors are a newer class of screen that have crept into the display market over the past two years, designed to pick up where dual/tri-screen layouts leave off.

The main difference between an ultrawide and a standard monitor is–you guessed it–the size and shape of the monitor. In particular, ultrawide monitors have a different aspect ratio. While a traditional flatscreen monitor will almost always display at an aspect ratio of 16:9 (the width-to-height measurement, or 1.77:1), ultrawide monitors stretch things out on a horizontal bias to 64:27 (2.37:1). When shopping for an ultrawide monitor you’ll see the number more commonly referred to as “21:9”, but this is just a marketing term that caught on when manufacturers realized the similarity of “16:9” to “21:9” would be easier for consumers to understand.

In other words…they’re really, really wide. 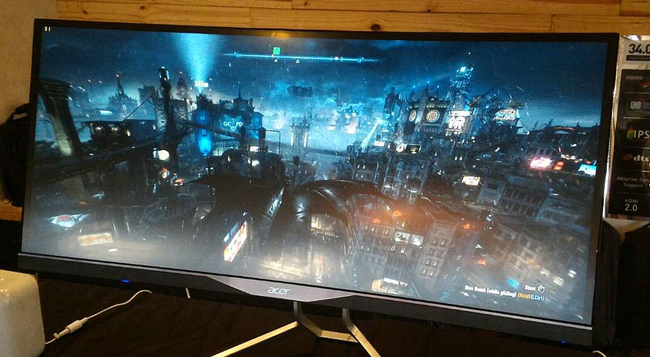 Ultrawide monitors display at either 2560×1080 or 3440×1440 pixels, depending on the size of the screen. A higher density of pixels means you can fit more programs, apps, videos or games on the same desktop without constantly switching between them.

Proponents of ultrawide monitors claim that by squashing the aspect ratio down to 2.37:1, users get increased space to multitask with windows side-by-side, a greater sense immersion while gaming, and a more cinematic movie viewing experience that’s almost indistinguishable from what you’d see in the theater.

What to Consider Before Buying

Of course, as nice as all that sounds, there are still pros and cons to an ultrawide setup.  Here’s what you should consider before making the jump.

What Are You Going to Use It For?

If you work from home or are planning to buy a monitor for your desk at the office, an ultrawide might be worth considering. The added screen real estate is helpful when you’ve got several projects or messaging apps open at once, and makes it so you can type in one window while video chatting in another without squinting to see who’s on the other end of the line.

Of course, you can do this with multiple normal monitors too–and, in fact, some prefer multiple monitors because they give you built-in dividers between workspaces, which can help divide up your windows. In addition, while ultrawide monitors give you more screen real estate than a single monitor, they usually don’t surpass the real estate of two monitors. (One “1080p” ultrawide monitor is 2560×1080, but two standard 1080p monitors add up to 3840×1080, for example.) 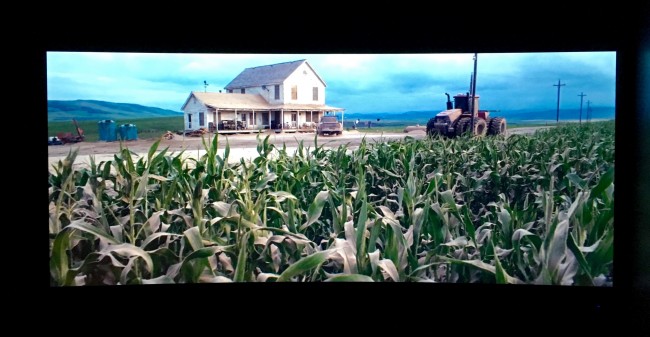 When it comes to gaming, ultrawide monitors give you a huge, beautiful field of view with no bezels in the center, like you get with dual monitors. Ultrawides give you a competitive advantage in games like League of Legends or Rocket League, where being able to see more of the field of battle in your peripheral means being able to spot your opponent before they spot you. Flight sims and racing games also look incredible in ultrawide, particularly on models that feature a curved screen for a more immersive feel.

But, while first-person shooters on do look better in 2.37:1, without a customizable interface vital HUD elements like the radar or ammo counts can be pushed out of your peripheral vision. If you play a lot of games in the FPS genre, you might be better off sticking with a traditional 16:9 display.

And, while ultrawide monitors are great in theory, some titles scale better than others in an ultrawide environment. If you’re uncertain whether or not your game of choice supports 21:9 scaling, you can search this list provided by Widescreen Gaming Forum, and there are tools that can fix the problem like Flawless Widescreen.

Lastly, ultrawides can be incredible for watching movies, especially if you’re tired of seeing black bars on the top and bottom of your screen. Many films nowadays are shot at an aspect ratio of 2.39:1, in what’s known as the “anamorphic modern widescreen format”. With an aspect of 2.37:1, ultrawide monitors fill almost every frame to near perfection, making for a truly full-screen viewing experience.

Can Your Graphics Card Handle It? 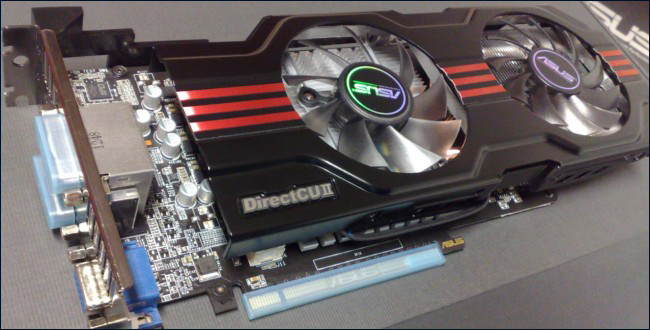 When buying an ultrawide, you should be certain whether or not your computer will have enough graphical power to support it.

At 3440×1440 pixels in the 34″ models, ultrawide screens contain 140% more pixels than traditional 1920×1080 setups. 140% more pixels means 140% more power necessary to display them all, so if you plan on doing any serious gaming, you’ll need a pretty beefy graphics card to support the increased resolution. If you’re doing normal desktop work, however, you may have more wiggle room.

That said, ultrawide monitors don’t require as many outputs as multi-screen setups, which is nice if you only have one display output on your laptop or desktop. Multi-screen setups require a separate cable and port for each monitor, but an ultrawide only needs one HDMI or DP 1.2 plug to get you up and running.

RELATED: Why Would You Want a Curved TV or Computer Monitor?

Just like when you shop for any other type of HDTV and monitor out there these days, the first thing you need to do is make a decision about its shape: to curve, or not to curve.

We’ve already broken down the pros and cons of the curved vs. flat before, but in summary – it all comes down to your perspective (pun intended). If you want a more immersive, cinematic experience and don’t mind losing a bit of viewing angle to get it, curved displays are great. If you want a monitor that more than one or two people can watch at the same time without straining their neck to see the whole picture, a flat design will probably be the better choice.

Right now, ultrawide monitors are being sold in size configurations that range anywhere from 25″ to 35″ across, though we don’t recommend going below 32″ if you can avoid it. Even if a smaller screen is easier on your wallet, the multitasking benefits of ultrawide monitors aren’t as readily apparent when the increased resolution makes text too small to read, or applications too tedious to navigate.

Ultrawide monitors once came at a premium, but prices have started to come down recently to meet consumer demand. In fact, they’re about the same price as a regular 16:9 widescreen monitor.

It’s impossible to compare the two monitor types directly, due to the differences in resolution and size, but that won’t stop us from trying. Take this ASUS 27″ 16:9 monitor, which has a resolution of 2560×1440 and retails for $469. The closest ultrawide monitor–in terms of diagonal screen size and screen resolution–is this ASUS 29″ 21:9 ultrawide, with 2560×1080 resolution. It retails for $419. That’s a little less than the regular 16:9 monitor, but about what you’d expect given its slightly lower resolution.

So if you’re deciding between a traditional monitor and an ultrawide screen, the price should be comparable, pixel-for-pixel–the pixels are just arranged a little differently. Of course, you could get even more pixels by buying two comparable 1080p monitors for the same price as the ultrawide, albeit with a bezel in the center of the layout.

People who are looking to replace their current multi-screen configuration should keep an eye out for a “screen splitting” feature on their next ultrawide monitor.

Sometimes it’s called “MultiTask”, or just picture-in-picture depending on the brand you go with, but in essence it’s the feature which can take multiple inputs and split them them up by quadrant on a single display. This simulates the style of system segmentation you’d get with a multi-monitor setup, in case you want your laptop and desktop to still be able to share the same screen.

Prospective ultrawide buyers also need to make sure they have enough space on their desk to fit the monitor without it tipping over. The widest of the ultrawides can measure nearly three feet across with the bezels and case accounted for, an imposing footprint if you work in an open-cubicle office or own a smaller desk at home.

If your plan is to mount the monitor on a wall, double-check to see if your ultrawide actually comes with VESA compatibility first. Because of their unorthodox shape (especially curved designs), not all ultrawides have VESA-ready screw holes on the back. This can be a problem for users who prefer to mount their monitors instead of keeping them on the stand.

So, with all that in mind: should you get an ultrawide monitor or go with a multi-screen setup?

The answer, as always, is: it depends. Multi-screen setups can offer a level of customization and versatility that ultrawides can’t match. For example, you can stick one monitor in portrait mode while keeping the other(s) in landscape for work, and switch it back to dual-landscape when it’s time to fire up a game or watch a movie. Not everyone wants extra horizontal real-estate, and many would actually prefer to have more vertical space to work with depending on the demands of their job. 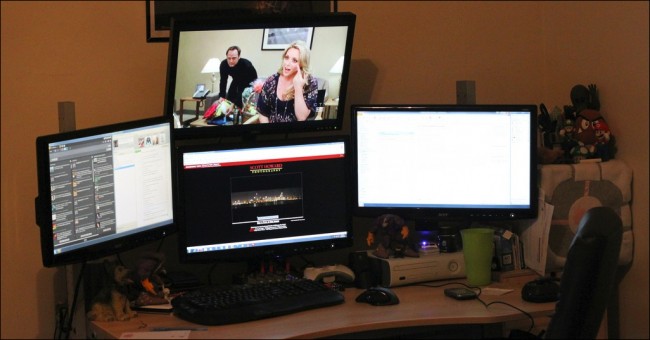 But the need for ultrawide monitors wouldn’t exist if multi-screen configurations were perfect.

In multi-screen layouts, the bezels of each monitor in the array are separated from another in the space where the two edges meet. This puts a big black bar between two parts of an image, which can be an automatic immersion killer for some people, while others may prefer to have it as a point of reference for where one screen ends and another begins.

Like the curved vs. flat debate, whether you go with a multi-screen setup compared to an ultrawide all comes down to personal preference.

Ultrawide monitors are still a relatively niche product for a very specific type of customer, but that doesn’t mean a new one wouldn’t look great on your desk. With prices that match (and sometimes beat) the 16:9 competition and more models being released by the day, it might not be long before we’re asking ourselves how we ever worked, gamed, or watched movies any other way.