Have you ever wondered what the future looks like?

Well, you don’t have to wonder anymore. The future is 4K, and it looks amazing.

Cinematographic cameras with 4K resolution have been around for a long time, but its introduction into the mainstream is relatively recent. Movie cinemas began integrating 4K resolution around 2011, and the first 4K home theater projector was released in 2012. But it wasn’t until last year that Blu-Ray technology and next-generation consoles began incorporating 4K technology. However, 4K is exploding at a rapid pace, and you don’t want to be left behind.

The term ‘4K’ refers to the horizontal dimensions of the resolution. High-definition (1280×720) was known as 720p, and when 1080p came on the scene at it was referred to as full definition (1920×1080). 4K generally has an aspect ratio of 4096×2160 and is considered ultra-high-definition, or UHD. With approximately twice the vertical and horizontal radius of 1080p, 4K media is effectively four times larger and clearer than full-definition television. For computer monitors, the standard aspect ratio for 4K technology is 3840×2160.

Since ultra-high-definition technology is so new, finding a good computer monitor with 4K resolution can be a little tricky. But there’s good news: we’ve already done the homework for you. We’ve checked out the best 4K computer monitor and have the best ones below, so you don’t have to go through the trouble.

Don’t worry. You can thank us later.

Like all major purchases, there are some key elements to keep in mind when considering which product you are going to purchase.

Since 4K computer monitors are a relatively recent innovation, they won’t necessarily all be capable of the same resolution. However, computer resolution isn’t the only thing to be curious about. You should also how the monitor presents different color schemes. This is especially important if you intend to do a lot of gaming on your computer.

2. Size of the Monitor

Screen size and resolution do not directly correlate. Or, to put it simply, it’s possible for a 26-inch monitor to have superior resolution to a 36-inch monitor. You should have a good idea how large you want your monitor to be. This can prevent you from buying one that is larger than you need and save you money.

For many of you out there, this will be a non-issue. Your desktop will be a stationary fixture in your office, bedroom, den or wherever else you choose to put it, and the monitor is staying put with it. But if you have ideas about porting your desktop around with you, you might want to consider how heavy it is. Some newer monitors can weigh over 20 pounds, so be advised.

Any modern UHD laptop is going to have an HDMI port. Most of them will also come with USB ports and possibly even audio output for speakers or headphones. Naturally, this won’t be a concern for everyone, but it’s worth paying attention to.

There is a plethora of 4K monitors on the market, and many of these are competitively priced with one another. So if you have a specific budget in mind, you shouldn’t feel pressured to pay more for added features. A $400 4K monitor will still have the same resolution as a $600 4K monitor, but the more expensive monitors will still deliver a better performance. It’s very important to stay within your budget, but it’s also good to know what you want out of your monitor.

We know that not everyone has the time to peruse a long list looking for the best monitor. Some people don’t like shopping, and others just want to know what will give them the best value for their money. We believe that the LG Electronics 4K UHD 27UD88-W 27″ LED-Lit Monitor is the best value for it’s price. 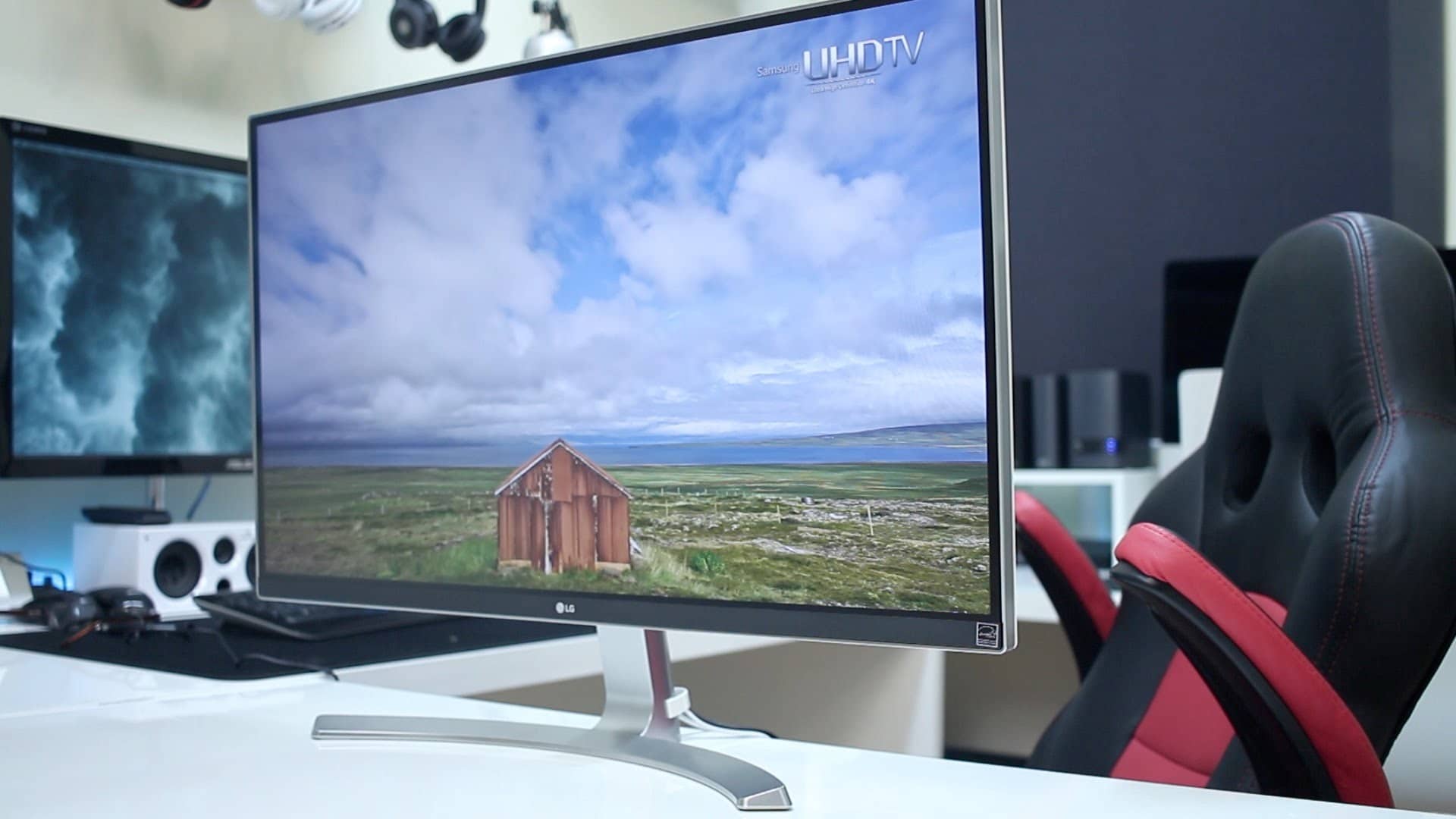 Video gaming is one of the areas where 4K monitors are in highest demand. This is partially because the computer-generated graphics benefit from the higher resolution more than movies and pictures and partially because PC gamers have long been serious about having the best graphics possible.

The ASUS MG28UQ 28-Inch FreeSync Gaming Monitor is designed with this audience in mind, and is programmed with features and abilities that will appeal especially to gaming enthusiasts. Some of the features are standard, such as a TUV certified flicker-free screen and an optional blue light filter to minimize eye strain.

What stands out with this monitor is its more advanced features, especially for the price range. For example, the monitor has a 1ms response time, which helps to combat performance-based lag. The monitor also uses Adaptive FreeSync technology that coordinates with your GPU, providing superior frame rates with less screen tears and inconsistent frame rates. The monitor has a 60 Hz refresh rate, comes with two USB ports and features an ergonomic base that allows you to adjust the screen to your preferred angle. The monitor also has 2X HDMI 2.0, DisplayPort 1.2 and two USB 3.0 ports, and comes backed by a three-year warranty.

If you’re a hardcore enthusiast who wants nothing but the best, the ASUS MG28UQ may not provide the performance you need. But if you want a great 4K experience without paying a premium price, this is a hard monitor to beat

Welcome to next-gen technology. This Samsung computer monitor offers stunning UHD resolution at a reasonable price. This 28-inch monitor uses eight million pixels to create crystal-clear images you have to see to believe. Not only does the monitor offer extreme resolution, it takes color to a whole other level. Traditional monitors offer 16.7 million colors. This Samsung can support over one billion colors!

Using Picture-in-Picture technology, the monitor makes it easy to multi-task, by providing two windows for watching movies or browsing the internet while working on spreadsheets, writing projects or whatever other tasks might need to be accomplished. Dual HDMI ports allow you to connect two HDMI-connected devices, such as a PC and gaming console, simultaneously, allowing your monitor to function as a gaming television as well as a computer monitor.

The 24-inch Dell Ultra HD monitor offers the ultra-detailed resolution and incredibly rich colors you expect from a 4K monitor at an exceptional value. A combination of HDMI and USB ports allow you to interface your monitor with computers, gaming consoles, tablets and smart phones without compromising the image quality. Audio ports allow you to plug speakers directly into the monitor, making it an ideal way to enjoy video games or listen to your iPod playlist.

In addition to its superb resolution, color quality and connectivity, this monitor is also built with the environment in mind. It meets Energy Star ratings for low power usage, does not incorporate toxic mercury in its LED screen, is free of BVR and PFC in its wiring, and has a chassis composed of at least 25% post-consumer materials, so you can feel good about your purchase in more ways than one.

It is no secret that staring at a computer screen all day can be very hard on the eyes. That was one of the factors that motivated the development of the

The Best Computer Monitors of 2018
The future of PC monitors: It’s all about the curve